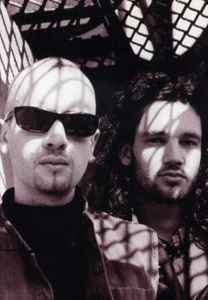 The sound of Swamp Terrorists can be defined like a thousand Swiss collapsing mountains. They are natives of Bern, Switzerland. Swamp Terrorists began their career at the beginning of the 80's with Ane Hebeisen and STR. In 1988 they recorded their first single "He Is Guilty" with the label 150 BPM Records of Switzerland. In 1990 they sign with the German label Machinery Records, that same year they recorded their first LP “Grim - Stroke – Disease”, and in 1991 the second LP “Grow - Speed – Injection” together with the “Rebuff!” single.

This duet defines its style as "Street Tech Beat", however, I define them must as Electro-Thrash. These Swiss terrorists don't negotiate with the music, their style impacts the electro-fans and well the head-banggers followers of the metal music, having fans from Switzerland to Mexico, passing by Germany, U.S. and Brazil.

Nobody knows if somebody finished with them or they decided to finish their career of electronic terrorism, but the important thing is that they did a great damage in the musical scene.