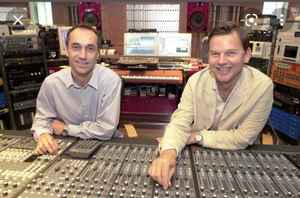 Profile:
Snap! evolved from Power Jam.
After the tremendous success of "The Power", Snap! released their first album, "World Power", which revealed many other hits: "Ooops Up", "Cult Of Snap" and "Mary Had A Little Boy". The latter, a frenetic hip house/piano anthem, revealed to be a huge club hit and the direction taken by Snap! afterwards to follow that path was logical. The original lineup featured Luca Anzilotti, Michael Münzing, Penny Ford, and Turbo B., who appeared on the debut album "World Power". Janice Robinson spent a year with Snap! on their first world tour in the early 1990s.

Ford decided to back out from the group in 1992. A friend of Ford's, Thea Austin, was presented to Anzilotti and Münzing to replace her. Durron Butler (Turbo B.) tried to convince the producers to make a hip-hop record. "Colour Of Love" announced the release of "The Madman's Return" (1992), but eventually flopped on the charts. A second single, "Rhythm Is A Dancer" came out. Based on the melody of "Auto Man" by Newcleus (1984), the song soon became one of the greatest dance hits of the 1990's. The melody from "Auto Man" was also used for the album song "Money". Unsatisfied, Turbo B. left Snap! as did Thea Austin, who broke her contract to go solo. Madonna's vocalist Niki Haris was hired to re-record the last two singles from "The Madman's Return". Both were successful releases.

In 1994, Snap! decided to go Trance on "Welcome To Tomorrow", with the participation of featured artists such as Summer (Paula Brown) and Rukmani. The formula proved to be as successful. Around 1996, Eurodance started to collapse. A compilation of greatest hits was released alongside remixes and a new version of "The Power" performed with rapper Einstein (2) (Colin Case).

After four years of silence, Snap! tried a comeback in 2000 with "Gimme A Thrill". The single, which was supposed to reconcile them with Turbo B., flopped, and a whole album called "One Day On Earth" never saw the light of day. A few disagreements between the producers and the featured vocalist, Maxayn Lewis, didn't help. From 2002 to 2006, Snap! was extensively remixed by a variety of electronic artists and released a couple of club singles which failed to relaunch their success story.
Sites:
snapmusic90.com, Facebook, Wikipedia, YouTube, YouTube
Aliases:
16 Bit, Anzilotti & Münzing, Challenge (6), Glas, Machineries Of Joy, Noys, Power Jam
Members:
Durron Butler, Jackie Harris, Luca Anzilotti, Michael Münzing, Penny Ford, Thea Austin
Variations:
Viewing All | Snap!
S.N.A.P, SNAP, SNAP!, Snad, Snap, Snap !, Snap!Attack, Snap., Snape, The Snap

Snap! was the first ever electronic dance music (EDM) act to break through on a global scale. It was also one of those acts that helped to bridge the boundaries between the various EDM styles and as such, re-shaped hiphop, r&b and house into a mainstream form of "dance".
But Snap! also had an experimental side, which can be heard on their albums, in the remixes of their hits (made by themselves or others), in the remixes they made for others and in their DJ mix albums. Especially on their "Welcome To Tomorrow" album, they experimented with high-speed techno beats paired with soft instrumentation and vocals, paving the way to what is now called "trance". The song "World In My Hands" on that album is an early form of "triphop", made populair by bands like Portishead, Air and Hooverphonic.

Sure, there were other versatile EDM acts in the early 1990s. Such as Culture Beat, Black Box or Dr. Alban. But they did not have the measure of success Snap! had those days.

Simply said: without Snap!, there would be no C&C Music Factory, no 2 Unlimited, no Ace of Base, no Vengaboys, no Pitbull, no LMFAO.

All three are beautiful, great albums. Not perfect, but fun to listen to. This music is innocent. It's made for fun and each member put their heart into it. Something remarkable came out. Yep, this is early 90's definately, along with De La Soul 3 Feet High And Rising, Dr. Alban Hello Afrika, Deee-Lite, Enigma, Technotronic and many others. 4/5 for each album. I'm sure 100 years later they will use some these tracks to showcase how early electronic dance music sounded like. Snap! will never be forgotten. My favourite track is probably Rhythm is a Dancer. Such a powerful song.

February 13, 2019
love snap Many great hits thank you very much.
And special thanks to
Durron Butler love his Voice ♥
Reply Notify me 1 Helpful

Snap! were the best producing group of the 90's, and only the original versions of their own songs as "The power" and "Rhythm is a dancer" were great successes, in general, with other songs like "Good vibrations" by Marky Mark & The Funky Bunch, "Gonna make you sweat (Everybody dance now)" by C+C Music Factory, "Groove is in the heart" by Deee-Lite or "Everybody, everybody" by Black Box.

The 90's, in general, was a great decade, not only in music, but at everything too.

One of the best techno house dance music groups of all times,SNAP is revolutionary in all aspects.Anzilotti & Munzing have been on this road called success for over 30 years.That I know it all started when both formed a house music group called 16 BIT ,who generated a hit called HI SCORE (it's TUBULAR !).This track is full of ATARI like bleeps,powerful vocals, oriental like chants ( a sample of this is found on EXTERMINATE(DG MIX),which is available on SNAP! ATTACK - the (brilliant) REMIXES) .Then,a year later or so they introduced SNAP to the world.And the world would never be the same.All nations,discos,radio stations,DJs and MTV(I don't like it at all) discovered the POWER of SNAP! Most of their tracks became great hits..Rapper Turbo B is excellent, as well as the mesmerizing,hypnotic beats,dazzling vocals and the instrumental/DJ work are simply among the best in DANCE MUSIC.Every decent dance music compilation features at least one SNAP masterpiece (generally THE POWER or RHYTHM IS A DANCER).If you still don't know the POWER of SNAP start listening to this,and then after becoming addicted to SNAP,enjoy the other SNAP ALBUMS and gorgeous REMIXES.

Pretty sure the artist profile is incorrect.

If Snap couldn't get permission to use lyrics from "Let the Words Flow" why do some of the lyrics still appear in the finished product?

Wild Pitch were a US hip hop label. I doubt they would have signed a dance group from Germany.

Here is what I have pieced together through reading about what happened through the years:
Snap sampled Chill Rob G's line "It's gettin kinda hectic" from "Let the Words Flow". As a result Wild Pitch approached Snap for damages. Wild Pitch were given permission to use Snap's music to release their own version of The Power with more lyrics lifted from "Let the Words Flow". See Power Jam and Chill Rob G.