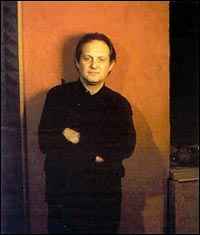 He studied Physics and Mathematics in Aristotelion University of Thessaloniki where he got his diploma. Exploring his evident creativity beyond science, Floridis then studied classical clarinet under the Romanian professor Konstantin Ugureanou and started his career as a professional musician in the 70s.

He counts as one of the main figures of jazz in Greece, not least because in 1979 Floridis together with Sakis Papadimitriou recorded the first modern jazz album that was produced in Greece - "Improvising at Barakos" (double LP). That moment marked the roots of the Greek domestic scene which then grew to the one we know today.
His rich and diverse career as well as his ever-progressive vision has been and keeps on pushing his work down often unexplored avenues and certainly beyond the Greek scene from very early on.
Building a name as a top impro and free jazz performer and creator, he had the opportunity as a leader and co-leader to collaborate and record with international avant-garde names like Peter Kowald, Guenter "Baby" Sommer, Paul Lytton, Okay Temiz, Nicky Skopelitis, Paul Lovens, Phil Wachsman, Carlos Zingaro, Hans Schneider, Louis Moholo, Vincent Chancey, Jean-Marc Montera, Milos Petrovic, Ivo Papazov as well as with prominent Greek musicians Savinna Yannatou, Dimitris Polizoidis, Babis Papadopoulos, Michalis Siganidis, Kostas Vomvolos, Ilias Papadopoulos and in Berlin with Michael Griener, Jan Roder, Chris Dahlgren, Olaf Rupp and Ulrich Gumpert.
This has resulted in the release of more than 40 albums throughout the years whilst he has also contributed in various productions of other artists in Greece as well as abroad.
Beyond these productions, Floridis has played concerts and festivals in Greece, Europe and USA with a great number of European and American musicians - Evan Parker, Peter Broetzman, Ken Vandermark, Irene Schweitzer, Ivo Papazov, Andrew Cyrille, Barre Phillips, Conny Bauer, Johannes Bauer, Mathias Bauer, Hans Reichel, Sirone, William Parker, Steve McCall, Andre Jeaume, Barry Guy amongst others.
Some of the international groups, in which he was a founder and/or member, are The Black Sea Orchestra, The Inter-Balkan Orchestra and The Florina Brass Band. Floridis also participated in the well-known Greek group Chimerini Kolimvites ("Winter swimmers") for more than 20 years and in the Euro-American Orchestra of Cecil Taylor in Berlin in 1987.

Besides his work as a musician Floridis worked as a producer for the National Greek Radio ERT 2 from 1995 to 1997. Between 1997 and 1999, he collaborated with the LYRA label as a producer, including the production of the albums The Black Sea Project by The Black Sea Orchestra and the second album of The Florina Brass Band. He also founded the label j. n. d. records (later j. n. d. re-records).
Floridis has composed and selected music for films, theater plays and dance performances. Since 1997 he has collaborated with theatre director Roula Pateraki. Amongst others he was responsible for the music of the plays "Splendid's" by Jean Genet and "Chomata" by George Veltsos. In film he composed the soundtrack for "Anna's Summer" (2001, by Jeanine Meerapfel), "Fictional Lies On Right Occasions" (2002, by Jeanine Meerapfel), "Marie Langer - Roman der Erinnerungen" (2003, by Lester Y. Cano Alvarez), "Faruk's Cafe" (2004, by Anna Schwingenschuh, Hakan Kurucu, Vera Bongartz, Jan Bonny, Zrinka Budjimila and others), "Mosconi or to whom the world belongs" (2005, by Jeanine Meerapfel), "Wer sich nicht wehrt, kann nicht gewinnen" (2006, by Jeanine Meerapfel) and "Der Deutsche Freund" (2012, by Jeanine Meerapfel).
As the first impro-jazz-musician in Greece he founded the International Festival of Jazz and Improvised Music of the Municipality of Thessaloniki in 1984 where he was the artistic director and coordinator for 8 years, attracting some of the top international names of the jazz scene.
For the festivities of the Cultural Capital of Europe – Thessaloniki 1997 he organized the 9 Days of Jazz Festival whereas more recently, he was the artistic director and organizer of the Impro Days Hydra (2008) and Impro Jazz "Megaro of Music" Thessaloniki (2010) festivals.

In the recent years, the not widely known creative side of Floridis as a painter has gained exposure internationally. In the past, examples of his work had frequently been featured in some of the music albums he has produced but nowadays it is being featured in solo as well as group exhibitions. In some special occasions, himself is introducing his work at the opening of such exhibitions, by playing solo. This gives the audience yet another perspective to his work by combining additional senses.
Sites:
florosfloridis.com
In Groups:
Floros Floridis Quartet, Grix, The Alliteration, The Black Sea Orchestra, The New Trio, WLSFW, Wutu Wupatu, Χειμερινοί Κολυμβητές
Variations:
All | Floros Floridis
F, F., F. Floridis, Floridis, Floros, Floros Florides, Φ. Φλωρίδης, Φλ. Φλωρίδης, Φλωρίδης, Φλώρος Φλορίδης, Φλώρος Φλωρίδης