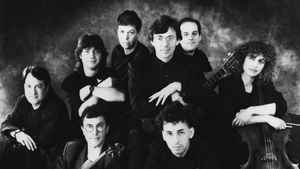 Profile:
The Penguin Cafe Orchestra (PCO) was founded by British composer Simon Jeffes (1949 - 1997). Born in Sussex, England, and raised in Canada and around Europe, Jeffes began playing the guitar at the age of 13 and then studied classical guitar, piano, and music theory at Chiswick Polytechnic, but dropped out before graduating.

While living in Japan in 1972, he developed an interest in ethnic music, particularly African styles, and decided to try to merge those styles with more traditional Western sounds. He launched the PCO as an outlet for his compositions with this eclectic hybrid approach. He always said that the "Penguin Cafe" concept was one that came to him in a dream while he was suffering from food poisoning in the south of France in the summer of 1972, after which he wrote a poem that began, "I am the proprietor of the Penguin Cafe, I will tell you things at random." He described the music of the group as "modern semi-acoustic chamber music."

November 22, 2022
...beneath pascal comelade & joseph racaille, penguin cafe orchestra-leader
simon jeffes (1949-97) is perhaps the greatest european composer coming out
of the "pop-art". all his 5 carefully recorded studio albums are
masterpieces. beloved by children of all ages! joyful, charming & heartful.
erik satie would be proud of all his youngsters today...

April 30, 2018
Definitely one of my favourite bands. Incredibly moving music