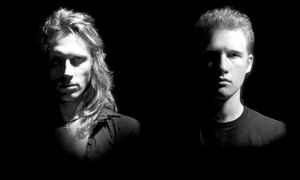 Profile:
Nox Arcana was formed in 2003 by Joseph Vargo and William Piotrowski. The name Nox Arcana is derived from two Latin words, which roughly translate to "mysteries of the night." Nox Arcana is primarily known for creating conceptual, themed soundtracks with classic horror and Gothic literary references. Many of their albums also contain hidden riddles and interactive puzzles.

Nox Arcana's debut album, Darklore Manor, was featured as the musical score for the WB's televised special of the 1922 silent film classic, "Nosferatu", and has spawned a book of original horror stories, "The Legend of Darklore Manor and Other Tales of Terror". Their soundtracks have also been used in theatrical productions of Bram Stokers' "Dracula", Mary Shelley's "Frankenstein", Edgar Allan Poe's "The Pit and The Pendulum" and Lewis Carrol's "Alice's Adventures in Wonderland". Their music is used by professional magicians and dance troupes, aired on the Fox TV show "So You Think You Can Dance," and appears in several games like Civilization IV, Warhammer and Into The Dark. During the Halloween season the music of Nox Arcana can be heard throughout haunted attractions and theme parks around the world, including Universal Studios, Busch Gardens, Six Flags, and Knott’s Berry Farm.

Several of Nox Arcana's concept albums pay tribute to classic authors: Transylvania, ventures into the land of vampires, musically expounding upon Bram Stoker's Dracula. Necronomicon pays homage to H.P. Lovecraft. Blackthorn Asylum explores the horrors of a forsaken 19th century sanitarium with an original storyline that expands upon Lovecraft's "From Beyond." Carnival Of Lost Souls takes listeners inside an old-fashioned traveling circus in the tradition of Ray Bradbury’s short story "Something Wicked This Way Comes." Shadow Of The Raven is a tribute to 21 horror stories by Edgar Allan Poe, while Grimm Tales brings the childhood nightmares of the Brothers Grimm to music.

Nox Arcana created the music for Blood Of Angels in 2006, an album featuring vocals and lyrics by author and vocalist Michelle Belanger. Nox Arcana also delved into the realms of fantasy with Blood Of The Dragon, which opened at #4 on Amazon's New Age chart in its first week of release. Phantoms Of The High Seas explores the mysteries of the deep with a ghostly adventure steeped in pirate lore. Their gothic-Christmas release Winter's Knight peaked at #8 on the Billboard Music Chart for Best Holiday Album in 2006 and 2007.

In 2009 Nox Arcana became a solo project of Joseph Vargo, who is the sole composer and musician on Blackthorn Asylum and all subsequent albums, with William Piotrowski still providing the engineering. Winter's Eve and Winter's Majesty continue the medieval winter holiday theme. Theater Of Illusion is set in an old Vaudeville theater on Halloween night. The Dark Tower is based on Vargo's original "Dark Tower" book series which follows the story of a vampire lord in his quest to solve ancient mysteries surrounding an accursed keep. Vargo also composed the music for two Buzz-Works albums, Zombie Influx and House Of Nightmares. Vargo has also written songs for albums by Midnight Syndicate, Acid Witch, and Legion Of The Damned.

In October 2013, Vargo released Legion Of Shadows as a dedication to fans and to mark Nox Arcana's 10 year anniversary. Piotrowski simultaneously debuted Crimson Winter (Original Motion Picture Soundtrack) for a vampire film of the same name. In December 2013, Joseph released the first volume in a series of winter holiday EPs, culminating with the full-album release of Ebonshire in 2018. With the release of Gothic, Nox Arcana defined the genre, while Season Of The Witch explored the various aspects of the craft, both good and evil. In 2019, Joseph Vargo released The Cabinets Of Doctor Arcana (Game Soundtrack) following the video game success. For Halloween the same year Nox Arcana released The Haunted Symphony which tells the tale of a tormented musician who becomes obsessed with creating a dark masterpiece dedicated to his lost love.