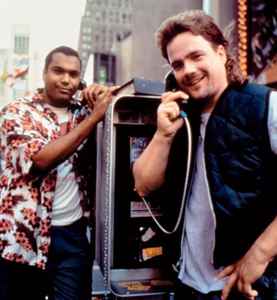 Profile:
Telephone pranksters who have released several compilations of prank calls in which they tease unsuspecting victims.
The duo was founded in 1989, and were initially made up of childhood friends Johnny Brennan and Kamal Ahmed. After Ahmed left the act in 2000, the Jerky Boys continued on as a solo act featuring only Brennan, before going on hiatus after the 2001 release of their final album, The Jerky Tapes.
In 1995, the duo appeared in Touchstone Pictures' The Jerky Boys: The Movie.
Sites:
thejerkyboys.com, Facebook
Members:
Johnny B (2), Kamal (3)
In Groups:
The Subjectivist League
Variations:
Viewing All | The Jerky Boys
Jerky, Jerky Boys