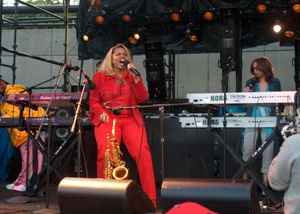 April 8, 2009
Norma Jean Bell played on a 1976 Gold selling album, "Tommy Bolin Private Eyes". She is credited for saxophone, vocals and percussion. Norma was in the band from April 1976 to the final show on December 3rd, 1976. Bolin would succumb the following morning due to a heroin overdose. (How sad!) What a loss, definitely the most original guitar player of all time.

Other musicians in the Tommy Bolin band:

When i went through the list of Norma's disographies, it did not mention Private Eyes on Columbia Records, you can also see pictures of Norma on all of Tommy Bolin's websites.

As a "Bolin archivist these statements are true."