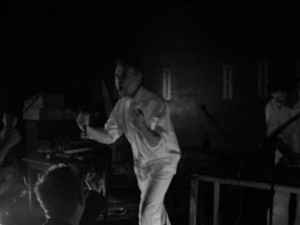 Profile:
English transgressive art unit formed by Kevin Tomkins in 1982. Started as a Power Electronics act, quickly gaining a name for itself, before branching out stylistically, creating a distinctive style that drew influence from all manner of genres while keeping true to their roots as a noise act. In its original form Sutcliffe Jügend existed for less then a year before Tomkins stopped the project to join Whitehouse. He reformed SJ in 1994 with Paul Taylor (6) who also played on some of the project's early material.

August 30, 2020
"Only time will tell what exactly these two are up to."
They started a new band immediately!
https://www.discogs.com/artist/7782552-Slaves-No-More
Reply Notify me 1 Helpful

October 26, 2019
Calling Sutcliffe Jugend a Power Electronics band would be a gross oversimplification of them. “We Spit On Their Graves” was fairly basic: screaming over industrial noise. Since then, however, their sound has gotten much more complex. Their Death Factory material had the duo getting into ambient territory at times. Then there was the string of albums they released in the late 2000’s, with “The Fall Of Nature” being particularly eclectic. By the time “Blue Rabbit” came out, they had proven themselves to be much more than simply “Whitehouse 2”. And the material that Tomkins and Taylor churned out since 2016 only made that clearer.

Sadly, the name is no more: This February came with the announcement that the duo has decided to stop performing under the moniker. With this news, they have left a decades-long legacy behind them. But Tomkins and Taylor are apparently moving on to a new project. Only time will tell what exactly these two are up to.
Reply  See 1 reply Notify me 3 Helpful

February 9, 2004
Consisting of members Kevin Tomkins and Paul Taylor, UK-based Sutcliffe Jugend is one of the truly pioneering acts in the power electronics genre. Besides releasing some of their earliest material on William Bennett's Come Organisation imprint, Tomkins was a contributing member to Whitehouse on such releases as 'Cream of the Second Coming', 'Great White Death', and the impossible-to-find 'Right To Kill'. While many modern p.e. groups are stil mimicking Sutcliffe Jugend's earlier work, the duo truly transcended their old sound for something noisier and nastier, clearly evident on their two Death Factory albums and one 7" single. Sexual serial murder electronics... a must for extreme music fans!
Reply Notify me 8 Helpful