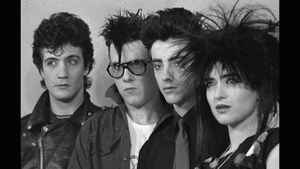 Nacho would leave the band to center in "Alaska" and Ana Curra would move from "Alaska" to "Parálisis Permanente" to record their first and only album, "El Acto" (1983): Eduardo died in a car accident in May, 1983 returning from a gig, and the band would split up.