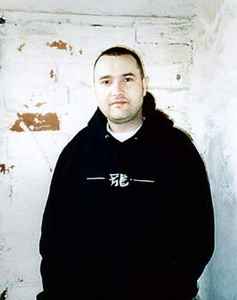 Real Name:
John Bolloten
Profile:
The Rootsman is a musician and DJ based in Bradford, England. His musical career began when he was living in Edinburgh, Scotland and taught himself to play guitar in 1978 at the age of 13 and formed his first punk band. With his group "State Oppression" he made his debut gig in 1981, supporting the Angelic Upstarts. After 3 concerts, he decided that being a guitarist in a band was not for him and he retired from that aspect of the music business. He moved to Bradford in 1983 and quickly immersed himself into the local reggae scene. He worked for over two years in the local Roots Record Shop, where he began to be known as "Rootsman". In 1985 he started selecting on local sound systems and the following year began to play on university radio and local pirate radio stations. This continued for a number of years until he founded his own club night "Dub Me Crazy" at the end of 1991. He also ran the Third Eye Music label.
Sites:
Bandcamp, Facebook, MySpace
Aliases:
John Bolloten
Variations:
Viewing All | The Rootsman
John Rootsman, Rootsman, The Rootsmen, الروتس مان