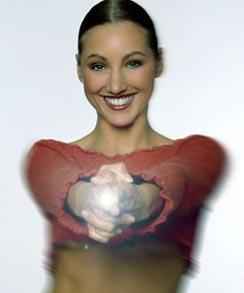 Profile:
Founded and produced by Wessel van Diepen & Dennis van den Driesschen (a.k.a. Danski & DJ Delmundo) and Sebastiaan Molijn & Eelke Kalberg (a.k.a. Pronti & Kalmani). Alice Deejay is trance/dance project that enjoyed huge success in Europe and in Japan from 1998 till 2002. The project's face was Judith Anna Pronk with two other dancers.

Between 2014 and 2021 Alice Deejay made a comeback with a new voice and face - Ilona Vangelder. Also with several new dancers, such as Wesley Vennoza, Amaranta Wolters. During this period, the group was called Alice Dj and not Deejay.

January 26, 2014
A decent trance offering with this outfit, this was a time when trance ruled supreme in pretty much any music arena. I think its a little harsh to say she/them was a one hit wonder or a cheesy pile of crap. Trance went commercial in the end and at the time Alice's tunes were around in the underground scene before interest in the commercial scene took over, I remember hearing it Better Off Alone nearly a year before it hit the charts, Radio 1 then got hold of it then thats pretty much how it got into the public eye. Judith Pronk (aka Alice) did some more tracks with the outfit but ultimately decided she wanted to take a back seat and pursue her career aspirations as a make up artist which she now does. It seems like she flirted with the music for a while then changed her mind, she didnt want to sing on the Guetta track (thank god because its terrible) so they used the instrumental to Better Off Alone and practically ruined a club classic, she knew which way it was going and had the sense to not reprise her role as Alice Deejay. For what she has done with the album and singles was great! I really enjoyed what she put out at the time and her tracks STILL get a great response when I play them out.
Reply Notify me 6 Helpful

In response to the last few comments about poor Alice (or whatever you want to call them) - I say give them a break already. So what if the majority of the material was ultimately had a pop/top 40 flavour to it? Alice Deejay as an act did two really important things for dance music in general as I see it: 1) They continued the trend that other recent artists like Amber, Jamiroquai, and Basement Jaxx also had made and continue to make - hit singles which are monster songs in clubland (no matter what your genre) but have also played key roles in the continuing exponentital growth of club music at mainstream radio in countries like the U.S. where top 40 radio has become so homogonized its a farce of itself. BUT... even more important, I think, is 2) while there have been an infinite number of incredibly talented female D.J.s (Sister Bliss - need I say more?) and club icons -- Alice Deejay, a real D.J. or not -- broke the gender barrier with music consumers down to even the most informed buyer. Hell it took forever to be able to walk up to a stranger on the street and ask them who the biggest DJ in the world is or who their fave was, etc. and at least get the usual Tiesto out of them instead of a blank stare. Now you can ask those same types of consumers who do you think the world's biggest/your favourite male DJ is you'd still probably get the stock Tiesto answer for the most part... and now you can also ask of them their favourite female DJ is or who the biggest female DJ is, 9 times out of 10 you'll get "oh... oh wait a minute .... that Alice girl - Alice DJ yeah her!"

Sister Bliss (and numerous others) will always command a certain respect from me because she's damn good at what she does - and has managed to be successful despite having to forge her own road. The Alice Deejay crew may not have the incredible breath of musical talent that Bliss does but they -- and in particular Judith Pronk -- gave the world a household name for a DJ who was female to boot. I think that incredible contribution to helping blow away the gender barrier for up and coming (and existing) female D.J.'s is well worth a few trite lyrics here and there. Thank you, Alice (and crew). =)

Judy is the main singer, whilst Gaby & Jane does backup vocals. And when you put them all together to dance and lipsync you have a top40 hit on MTV. Hooray.

As with "Rollergirl", "Alice Deejay" should have been laid to rest after it's first release; "Better Off Alone" (when they still were "DJ Jürgen presents Alice Deejay"), which wasn't all too shabby. Signum's remix and the instrumental version are actually good tracks.

I'd like to end my review with a quote about our Alice; "..chock full of bleached-white smiles and powdered trance-pop, this girl-centric "collective" from the Netherlands relentlessly pours on the three-minute co-opted dance tricks until even the staunchest defenders of cheese will be reeling in pain". Yeah, that's about it.
Reply  See 2 replies Notify me 1 Helpful

May 20, 2003
She is alrite. Better Off Alone was a great track and Its A Fine day was also good. The Lonley One was descent and thats pretty much all the songs that she had that I liked. The rest all sounded like Better Off Alone rip offs and I didnt care for them. I do wish however that she would come out with some new stuff. And where the hell is she, I cant find any current news or information about her.
Reply  See 1 reply Notify me Helpful

June 13, 2002
Terribly tacky and unrefined. Songs sound like they were made to be pop hits before they were even written. Simple "trance" that rides on its' overuse of one synth to carry a song. Vocals are attached to provide flavor in an attempt to flog a dead club horse.
Reply Notify me 1 Helpful