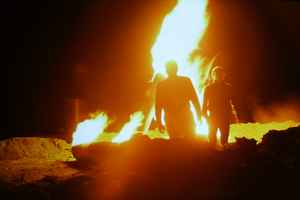 Profile:
American industrial/experimental band formed by Lon C. Diehl, Richard Skott and Carla Nordstrom (then known as Karl Nordstrom) in Port Huron, Michigan in 1982. Their first live appearance took place in September 1982 at the Harrington Ballroom inside the Harrington Hotel. The event was recorded on a portable cassette player and would become their first release. In early 1983, Nordstrom left the band and moved to San Francisco. Helmut Robison joined as a drummer in 1986. The group disbanded in 1989. Diehl and Skott briefly revived the group in 2011 for several performances that year in collaboration with Apetechnology.
Sites:
Bandcamp, SoundCloud, MySpace
Members:
Carla Nordstrom, Helmut Robison, Lon C. Diehl, Richard Skott
Variations:
Viewing All | Hunting Lodge
Lon Diehl

February 28, 2008
Hunting Lodge's musick stands the test of time. In my opinion, they are among others (Controlled Bleeding, Sleep Chamber, Monte Cazazza etc.) the earliest and most important diy electronic industrial bands in the 80s American underground. Rumors of a reunion circulated, but to no manifestation. Like many ahead of their time, sorely missed, overlooked or just unheard, ending ahead of their prime. They invaded and faded. The lodge stands on unoccupied. Rosselle Williams where are you? The wolf is hungry. This review was written by a vegan.