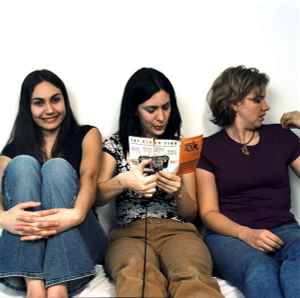 Profile:
Del Cielo formed in January 2001 in Richmond, VA. Andrea Lisi (guitar) and Basla Andolsun (bass) were attending Virginia Commonwealth University together. The latter introduced Lisi and Katy Otto (drums) to each other. Then Otto started making the commute from College Park, Maryland to practice. Andolsun had been playing in projects with each. After a few quick months of writing and rehearsing songs, their first show was in Richmond, Virginia, on May 10, 2001. Del Cielo's first release, a split 7" with the now defunct Denver band, Sin Desires Marie, came out shortly after on Ed Walters Records based out of Philadelphia, Pennsylvania.

In summer 2002, after some small tours and numerous local and regional shows, Del Cielo recorded its first full-length entitled 'Wish And Wait' at Inner Ear Studios outside Washington, D.C., with Chad Clark (Smart Went Crazy, Beauty Pill). The full-length was released April 2003 on Eyeball Records (CD) and Golden Brown/Exotic Fever (LP). In summer of 2003, the band embarked on an extensive six-and-a-half week national tour to support the release of 'Wish And Wait'.

They also released a second split 7" with the defunct Kill The Man Who Questions, a political punk band from Philadelphia that had since become good friends with Del Cielo. Two years after they released their second full-length, entitled 'Us Vs. Them' on Lovitt Records.

Del Cielo was a self-booked band with a strong interest in community, both in supporting other bands and friends and in playing benefits, rallies, and other gatherings related to social change. They participated in the Empower Program's Girls' Voices Conference for 200 teenage girls, Ladyfest D.C., Ladyfest Philly, Ladyfest South, Pointless Fest in Philadelphia, numerous Take Back The Night and Rock For Choice events, and a host of other festivals. The individual members were also busy: Andolsun played in Dischord Records' Beauty Pill, Lisi contributed solo songs to various benefit projects, and Otto runs Exotic Fever Records.

The band performed and toured with such notable acts as Rainer Maria, Q And Not U, Mates Of State, Against Me!, Decahedron, Kill The Man Who Questions, The Sound Of Failure, Light The Fuse And Run, 1905 and Crispus Attucks. On September 23rd 2005 they played their last show at VCU in Richmond, VA.
Sites:
MySpace
Members:
Andrea Lisi, Basla Andolsun, Katy Otto