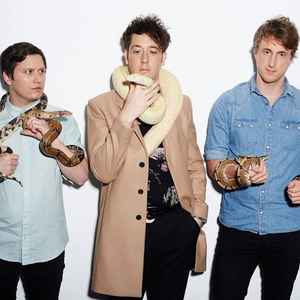 The group met while they were students at the Liverpool Institute for Performing Arts and released several EPs before their 2006 album Girls, Boys and Marsupials, which was released only in Japan. Their debut studio album, A Guide to Love, Loss & Desperation, was released in 2007 and featured some tracks first released on Girls, Boys and Marsupials. After releasing another EP in 2008 and touring for three years, the band released their second album, This Modern Glitch, in 2011. Their third album, Glitterbug, was released in 2015. The band released their fourth album, Beautiful People Will Ruin Your Life, on 9 February 2018.
Sites:
thewombats.co.uk, Facebook, instagram.com, MySpace, Twitter, Wikipedia
Members:
Dan Haggis, Matthew Murphy, Tord Overland-Knudsen
Variations:
Viewing All | The Wombats
Wombats