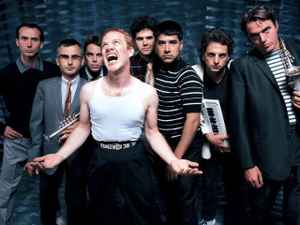 Profile:
American new wave band formed by songwriter Danny Elfman in 1979. The band emerged from a surrealist musical theatre troupe, The Mystic Knights of the Oingo Boingo, that Elfman had led since 1976 and written material for in the years previous. Oingo Boingo were known for their high energy live concerts and experimental music, which can be described as mixing rock, ska, pop, and world music. The band's body of work spanned 17 years, with various genre and line-up changes.

As a rock band, Oingo Boingo started as a ska and punk-influenced new wave octet, achieving significant popularity in Southern California. During the mid-1980s, the band changed line-ups, and adopted a more pop-oriented style, until a significant genre change to alternative rock in 1994. At that point, the name was shortened to simply "Boingo" and the horn section was dropped. The band retired after a farewell tour in 1995, for which they reverted to the name Oingo Boingo and readopted the horn section.

There's an amazing array of sounds present, but the main feeling is angular New Wave. It can range from downright Funk to (almost) Metal to be honest!

Every track on the first three albums is inventive & exciting, and while Danny may not always agree with your particular political landscape (I still don't know for sure if he's serious or not in tracks like Capitalism), you always find yourself singing along.

After Dead Man's Party they changed style quite a bit, like many 80's bands did.