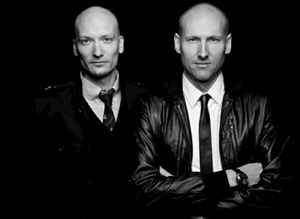 Profile:
Norwegian production, songwriting and remix team that started out in the late 1990's and originally consisted of three members - Mikkel S.Eriksen, Hallgier Rustan and Tor Erik Hermansen. Originally based in the city of Trondheim where they owned their own studio complex, Stargate Studios.

They created a large number of chart hits for numerous European recording artists and were particularly successful on the British market, where they were perhaps best known for their work with the pop group Blue, who collaborated with StarGate on every one of their albums.
In 2005, Mikkel and Tor Erik moved to New York to conquer the U.S. market whilst Hallgier Rustan stayed in Norway to pursue his own solo projects. Since then, the duo have gone on to work with and co-write material for numerous stateside artists, most noteably Rihanna (notably the singles We Ride, Unfaithful, Don't Stop The Music, Hate That I Love You, and Ne-Yo (with whom they frequently collaborate as both a singer and a songwriter), who's number 1 debut single "So Sick" was their breakthrough hit in North America.
Members:
Hallgeir Rustan, Mikkel S. Eriksen, Tor Erik Hermansen
Variations:
Viewing All | StarGate (2)
Duo Stargate, Star Gate, Star-Gate, StarGate Studios, Stargate, Stargate Studios, Strangate, The Stargate