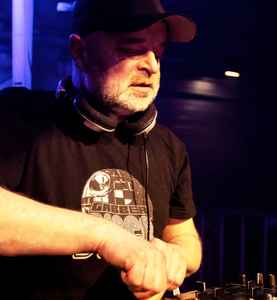 The biggest respect for the man behind NAPALM. That was simply sick series back then.

Additional it must be said that Martin Damm is not only an hardcore/acidcore producer.
He has an wide range of styles and a big output. Beside great acid, techno and breakbeat he even has written some hardtrance tracks.
The red line in his music is the forward storming energy beside some experimental, ambient and slower tracks. He is responsible for many famous tracks, under many different aliases like Biochip C, Speed Freak, Search & Destroy, "O" -
most of the output was distributed via Michael Zosels (Boy Records and Generator a.s.o.) M.Z. Musikverlag.
He is one of the first important German techno artists and contributes to Shockwave, Mono Tone, Force Inc, DJungle Fever and other famous foreign labels like Mokum or Drop Bass Network. Sometimes his tracks had a big influence of a labels sound philosphy, like it is seen by the listener. So not at least he's the reason for their success...
He has also a bigger fanbase in Japan, especially because of his wild, crazy sample-based upspeed tracks.

One of the most prolific producers on Hardcore scene ever. From the early 90s to nowadays, Martin Damm mostly known as The Speed Freak (or under a lot of others aliases) always has been produced very serious and extremely hard tracks. He was a pioneer on Acidcore style, combining a lot of acid sounds with hard banging beats, specially in his first era on labels worldwide like Shockwave or Drop Bass Network. Lately his works goes to more Industrial-Frenchcore-Speedcore style, shooting brutal kicks and crazy sounds to exterminate all brains on the dance floor.

Really one of the biggest names on Hardcore Techno. Respect.