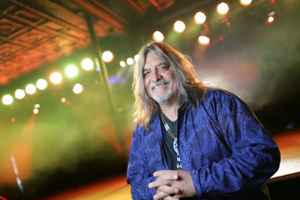 Coming full circle Steve Scorfina is the real timeless American Roots feel good music from the soul, to rock n roll your soul. A living legend, the thing that sets him apart is his songwriting fitting his unique style & guitar sound. In St. Louis, he debuted as a Mississippi Bluesy lead guitarist influence by the greats in the Northern Delta. In his teenage years cutting his teeth & playing at Chuck Berry's Park as a regular with Michael McDonald. At age 19 he brought REO SPEEDWAGON to their record deal penning their first single (Gypsy Woman Passion). Scorfina of REO Speedwagon was invited to participate 50 years ago at Woodstock, the band had prior bookings and obligations. Reo Speedwagon started as a University of Illinois garage band and reached the heights of arena rock. Now the members and former member of REO Speedwagon have been voted the top musicians in Illinois history by participants in the Illinois Top 200 project, a part of the state’s bicentennial celebration. Then, On then to record with James Burton & Elvis Presley's Rhythm Section for John Hurley. All will identify with Scorfina's garnered roots. You'll hear his songwriting & haunting guitar style of his recording years with CBS in Pavlov's Dog & Gulliver. His guitar stylings are featured in Alice Coopers & Smashing Pumpkins version of the song, "We're All Clones". In 2017 Scorfina reunited with Michael McDonald, cutting "Johnnie Be Good" on his 1934 Rickenbacher Frypan with Johnnie Johnson tracks on the piano. In 2018, Amazon Studios - Movie, "Beautiful Boy", Pavlov's Dog Song 'Of Once and Future Kings' showcases Scorfina's guitar acrobatics during the climax of the film. Scorfina always has many irons in the fire. As a 2x Classic Rock Hall of Famer, Live Scorfina showcases his songwriting with his multiple acts, AMBASSADORS feat. the songwriting of Steve Scorfina, David Torretta & Micheal Supe Granda, a supergroup of St. Louis musical Icons; Steve Scorfina’s High Octane CHROME & STEEL™ an all original, straight up, Mississippi River Roux style Rock and Roll served up by a veteran power trio; Scorfina Hulub Experience™ aka. The Ghostlighters™ with songwriting partner Greg Hulub; finally coming full circle as he celebrates over 5 decades in the business Scorfina Steel Bar Blues Band feat. all Chuck Berry alumnus debuted his bluesy cuts at the National Blues Museum in Dec. 2019. For the Scorfina's last concert before the Pandemic, he formed a supergroup of St. Louis music icons. The Ambassadors. You ask who they are? Steve Scorfina Pavlov’s Dog, REO Speedwagon, Dave Torretta (also voted the nicest guy in the world 3 years in a row) as well as played for and recorded Chuck Berry, Keith Robinson, who also played in Chucks band, and has more groove pockets than a man with five pair of crush velvet pants, Robert Johnson Lohr, another Chuck alumnus, who has been known to actually make those 88’s speak, and rounding out the lineup is Supe from Ozark Mountain Daredevils, you know him, you love em’.
Aliases:
The Catman
In Groups:
Pavlov's Dog, REO Speedwagon
Variations:
Viewing All | Steve Scorfina
S. Scorfina, Scorfina, Stephen Scorfina