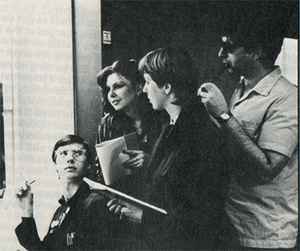 Real Name:
Daniel Miller
Profile:
Silicon Teens was a fictional United Kingdom based pop group in a similar vein to The Archies, and Gorillaz. The project was the creation of Mute Records founder Daniel Miller.

The "group" was publicised as a quartet named Darryl, Jacki, Paul and Diane, but in reality these individuals did not exist and for media interviews their parts were played by actors. The project was launched in 1980 with an album called Music For Parties, a collection of (mainly) old rock n roll classics played in a somewhat cheesy pop synthesiser style. There were three original compositions on the album, those being "TV Playtime", " and the instrumentals "Chip 'n' Roll" and "State of Shock (Part 2)".

Despite considerable media interest as a novelty, neither the album nor offshoot singles "Memphis Tennessee" and "Judy in Disguise" were ever hits, though their third (double-A side) single "Just Like Eddie" b/w "Sun Flight" did manage some UK Chart success.

Film director John Hughes was so taken with it that their rendition of "Red River Rock" can be heard in the movie soundtrack of the Steve Martin/John Candy movie Planes, Trains, and Automobiles.[1]