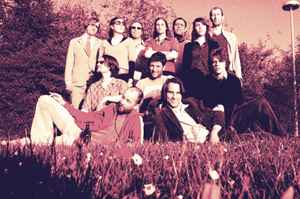 They are proud to be brilliant, earthy, hard-swinging, rebellious Boogoos, the dynamic musical movement of which Lex Volt is the acknowledged leader. The Boogoos indicate the development of an exciting new sound combining contemporary African spirit with modern funk from America.
But back to the beginning of the Volt story. It's unbelievable. Volt insists that he decided to play congas watching the seasonal players of the English Garden when he was 13. Volt was not breaking academic records when he was bitten by the brass bug. Father Wolfi Schlick, the headmaster of the Express Brass Band, was so relieved to find that his charge was showing signs of life that he rushed out and begged a conga from a local merchant. The career was launched. Lex has never looked back.
Volt is one of those legendary self-taught "naturals". After a few years of drumming behind the barn, he was playing in the clubs and street bands of Munich. His appearences were frenetic, violent, delirious - like harlem in the 20's or Al Capone's Chicago.
But, like a dark cloud, the tragedy of the hippie-bashing-doctrine eclipsed the light of joy in Bavaria. To escape the vicious religious discrimination, Lex Volt came to study at the African School of Music. Wolfi Schlick, excited by Lex' potential, paid his room and board for years. Finally in 2006 Lex brought together a dream of his teenage years, The Boogoos.
They have appeared together on great stages throughout the continent. However, Lex Volt has ever performed with greatest bravura and enthusiasm.
The other members of the Boogoos make up perhaps the finest rhythm, brass and vocal section currently performing in the country. A facile and boldly inventive pianist Sebastian "East-Holt-Unlimited" projects both lyric intensity and soul-stirring drive with equal authority. Sebastian also backs up Jools' and Szolt's vocals with appropriate grunts, shouts, and chants. Bassist Jerker Kluge, as known from his own outfit Hi-Fly Orchestra, is a marvel of speed, deftness, and big sound. With flawlessly constructed lines he offers strong but suave melodic as well as rhythmic support. Except when his hands are flashing like seared snakes among the cymbals, skins, and snares, Steve Deadline is the essence of modesty. But when he comes alive on stage he creates a glittering wave of percussion effects.
Together they play wonderful tunes of their own and great material from the vaults - all in a pathbraeking afro-funky way. You just have to experience them for yourself.

On the 16th of May they come back to their homebase with a bag full of new arrangements, pledging to repeat the frenzy of their last show in Munich before a handsomely appreciative audience at s.p.e.c.t.r.e.'s Atomic Café in autumn 2008. This club has superb acoustics and has been the scene of some of the most important entertainment events in recent years.