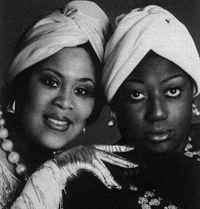 Profile:
As back-up singers for disco queen Sylvester, Izora Armstead and Martha Wash recorded under the name Two Tons O' Fun. They soon embarked on their own career as recording artists, and after recording what would be their biggest hit, "It's Raining Men", the girls rechristened themselves The Weather Girls. They remained active until 1988, when they went their separate ways.