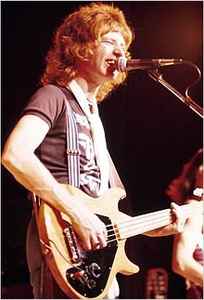 By the mid-1970's he had taken up the lead vocals and bass guitar to head the Ted Mulry Gang or TMG. The band scored a number one hit in 1975-6 with "Jump In My Car" (David Hasselhoff recorded a version in 2006) with a string of hit singles following, including "Darktown Strutter's Ball", "Jamaican Rum" and "My Little Girl".

Ted was a prolific songwriter, with a number of artists including John Paul Young, John Farnham, Alison MacCallum and Sherbet, recording his songs.