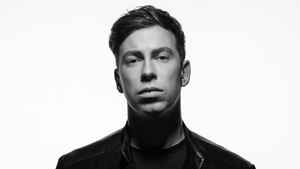 Real Name:
Robbert van de Corput
Profile:
Robbert van de Corput (born 7 January 1988), better known by his stage name Hardwell, is a Dutch electro house DJ, record producer and remixer from Breda, North Brabant. Hardwell was voted the world's number one DJ on DJ Mag in 2013 and again in 2014. He was ranked at number four in the top 100 DJs 2017 poll by DJ Mag. Hardwell is best known for his sets at music festivals, including Ultra Music Festival, Sunburn and Tomorrowland.

Learnt to play the piano at the age of four. At twleve he DJed at his first gig a friends birthday party, it was in front of 100 people & after the party his Dad came up with the idea of changing his DJ name from Robert to Hardwell. He did this by translating the family's last name, van de Corput, from Dutch into English.

Hardwell first gained recognition in 2009 for his bootleg of "Show Me Love vs. Be". He founded the record label Revealed Recordings in 2010 and a radio show and podcast Hardwell On Air in 2011. He has released eight compilation albums through his label, as well as a documentary film. His debut studio album, United We Are, was released in 2015.

On 7 September 2018, Hardwell announced his indefinite hiatus from touring, stating that he wanted to focus more on his personal life instead.

May 12, 2018
Some quite hatefull comments on here..
Shall I remind that Hardwell has a career that's pretty respectable imo.. Guy started really young after seeing Tiesto playing the Olympics...worked his ass of to start producing Tech/house and had a pretty successfull compilation series...Then went on to his first massive Spaceman hit..and so on, reaching most of the targets he dreamed off..

I'm not a big fan of his sound anymore, however I've seen him grow and met him numerous time. He was a really nice, cheerful guy when i've met him the first time, for one of his first gigs abroad...along the way i've met him more times, always a nice pal..

You might not like his music, but the guy is a legit producer, legit dj, has a legit career, and I think he's one of the few "real" ones..Cheers to him.
See 1 reply