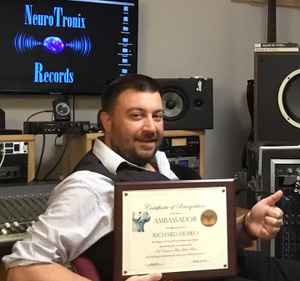 Real Name:
Richard L Demko
Profile:
RICHARD DEMKO is a classically trained pianist who started taking piano lessons at the age of 5. He went on to study drums, guitar, bass, and eventually, the art of production and engineering. Richard has played in various bands, and has toured all over the northeast with his primary project “Electric Mayhem. He has played as a session musician on countless songs and albums, most notably playing B3 tracks on two singles that feature Beach Boy Blondie Chaplin. (Release date TBA). He also plays and writes songs in a studio project called “Demkovic” which is comprised of Demko and his long time band mate, vocalist Suzanne Vick.

Richard honed his Production and Engineering skills with Vic Steffens at Horizon Music Group in West Haven, CT, and has worked with numerous local, regional, and national bands in the studio. Some of the more notable projects include working with Blondie Chaplin, Kasim Sultan, Edwin Hawkins, Mickey Curry, Scott Spray, Bobby “T” Torello, and Christine Ohlman. Richard also had the opportunity to mix some of the nations biggest bands and artists when he engineered for the legendary Toads Place in New Haven, CT, moonlighting as a Front of House Engineer and Monitor Engineer.

As a songwriter, Richard has an extensive catalogue of music ranging from classical to metal. He rarely sings on any of his own work, and usually employs session singers to lay vocals down on the music he writes that does contain lyrics. His catalogue contains a mix of instrumentals and songs that contain vocals, ranging in many different styles and moods. Some of his work is commercially available with the various studio projects that he has released. He does collaborate with lyricists from time to time, and has even collaborated with other musicians to write instrumental arrangements for artists who are looking for songs. He classifies himself to be more of a composer and writer more so than a “beat maker”, as his songs are always structured, and he always has a production vision for each and every song he writes.


rick d award.jpg
In 2019, Richard went on to form NeuroTronix Records, which is a full service, independent record label located in Seymour, CT. As the President and Senior A&R for the label, he actively scouts bands and artists to help promote, record and release music utilizing his knowledge and expertise that he has gained throughout his 20+ year career in the industry. With an amazing team of dedicated professionals who help him run the daily operations, NeuroTronix Records has become one of the fastest growing, and most reputable indie labels in Connecticut.
Sites:
richardldemko.com, neurotronixrecords.com