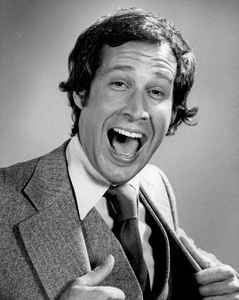 American actor and drummer most well known for numerous comedy films and as a former cast member of Saturday Night Live. Was a drummer in college for a jazz band known as The Leather Canary, along with Donald Fagen and Walter Becker. After Chase quit, the other two changed the name of the band to Steely Dan.
Sites:
Wikipedia, imdb.com
In Groups:
Cast of National Lampoon's Vacation, Chamaeleon Church, Voices That Care
Variations:
Viewing All | Chevy Chase
Chase