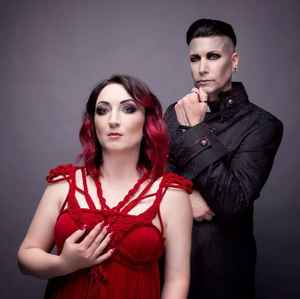 Profile:
German electronic band formed by Chris Pohl in 1998.
Blutengel (German: Blood Angel) (stylized as BlutEngel) are a German futurepop musical group formed by singer Chris Pohl (also of the groups Terminal Choice, Tumor, and Miss Construction and the owner of the Fear Section label) after he had to leave Seelenkrank due to contractual and legal problems. The lyrics are written primarily in German and English and are presented with male and female vocals. The themes of the songs usually center around supernatural, dark, and romantic themes such as love, vampirism, sex, fetishism, death, and immortality.

Blutengel was formed in 1998 after Chris Pohl had decided to give up the preceding project, Seelenkrank (which had released two albums), due to contractual problems. Just as its predecessor, Blutengel uses melodious electronic tunes in combination with both male and female voices. The lyrics are primarily in German and/or English and mixed between male and female vocals paired with electronic sounds and with songs often focusing on all aspects of love, from the tragedy of hopeless romance of vampires (all the way to the more animal aspects of desire) and aspects of death and the beyond travel.

The first album Child of Glass, released in early 1999 and soon became popular with the already existing fan community but also attracted a huge number of new fans with songs like "Weg Zu mir" and "Beauty of Suffering". Kati Roloff and Nina Bendigkeit were responsible for the female vocals at that time. However, although the album was still present in the minds of the people, things became quiet for the project itself for quite a long time.

Finally, in 2001, the second album Seelenschmerz was released and initiated a new era in Blutengel's short band history. The band formation changed as Nina had managed to cut her own successful path in the last two years, and Gini Martin joined the band as the second female voice alongside Kati. Catchy songs turned the album into an unexpected success, just missing the German Top 100 Album Charts, spurring Blutengel to appear live in front of fans. The first Blutengel gig ever (two years after the band was actually formed) took place at the Wave-Gotik-Treffen on June 1, 2001, in Leipzig, in front of 10,000 fans. At the end of 2001, the single Black Roses appeared with Constance Rudert as a session singer and the band performed at the Dark Storm Festival in which Constance also appeared in the stage at side of Kati and Gini. However, this was the last time the band would play with its original line-up. Kati and Gini left the band days later for personal reasons (Kati having a past relationship with Chris, who had just began a new relationship with Constance which caused problems backstage) and the two founded their own project, Tristesse de la Lune which Kati would be fired from a few years later. Constance, who had only been recruited to add some spirit to the single "Black Roses", soon became an inherent part of Blutengel replacing Kati and becoming more open about the relationship between herself and Chris who then managed to find a second equal female voice in Eva Pölzing, who was found soon afterwards to replace Gini.

Rise of popularity (2002–2007)
In 2002, due to the vocal scope they now had, and the move to a studio with new technical opportunities, the band managed to produce a high-quality album, Angel Dust, receiving a huge feedback placing 58th on the Top 100 albums in its first week because of hits like "Vampire Romance", causing Blutengel to become much more popular. The Angel Dust promotional photoshoot and booklet was made by Nina Bendigkeit.

In 2004 their fourth album, Demon Kiss, was released, featuring the single "Forever". A DVD release Live Lines and the album-length EP The Oxidising Angel appeared in 2005, the latter of which contained new material as well as a cover of "Cry Little Sister" from The Lost Boys soundtrack. These releases were more and more successful, but bad news came, when in early October Eva Pölzing decided to leave the band due to problems with time and projects in her personal life. Eva has been replaced by Ulrike Goldmann (ex-Say-Y).

For the next two years, the band released a couple singles with a slightly more "pop-driven" sound, until their long-awaited fifth album, Labyrinth, came out in September 2007. It became their biggest album to date at that time, and featured the single "Lucifer", and the live favourite "Engelsblut" which applied a smooth polish to their sound without losing the gothic foundation.

The extended albums (2009–2011)
In 2009 Blutengel released the album Schwarzes Eis, which featured the single "Dancing in the Light" and accompanying music video to promote the album. An extended edition of this album contained three full CDs, each with its own subtitle (Schwarzes Eis, the instrumental Behind the Mirror, and Redemption). The EP Soultaker was released later that year.

In 2010, they performed at the Amphi Festival with Anja Millow who had been hired in 2009 as a performer for the Schwarzes Eis Tour, replacing Constance. Days later, they announced in their official website that Constance has been replaced by two new singers, Anja and Steffi Weingarten, both featured on their seventh album Tränenherz, which was released in 2011 and placed high in the German charts at #12. This album also was released in a special edition, which included three CDs (Tränenzerz Discs 1 and 2, and the instrumental Sign of the Zodiac). Two singles "Über den Horizont" & "Reich Mir Die Hand" were released to promote the album, both with accompanying music videos.

The EP Nachtbringer followed that same year. a music video was released for the title track. Steffi was soon fired from the band before they started touring and on her official Facebook page, she wrote a statement claiming that she was not allowed to tour due to legal issues with Constance and the recording label was never keen on her. Anja has since left in 2012 to return to her Job as a model and performer for the clothing label AMF Korsets and to return to her college studies and as an independent designer for her label Madone Noire.

Monument and Black Symphonies (2012–2014)
From May 12 to May 20, 2012 Blutengel toured North America for the first time. Playing in Mexico City, New York, San Antonio, San Francisco, Los Angeles, and in Montreal for the Kinetik Festival.

Blutengel released an orchestral compilation album, Black Symphonies (An Orchestral Journey), on February 28, 2014. A single and music video for "Krieger" were released to promote the album.

The band then embarked on the first leg of the Omen tour in April and spanning through to August. Festival appearances include Wave-Gotik-Treffen, Mera Luna Festival, and Summer Breeze Open Air.

A new EP, In Alle Ewigkeit, was announced via the bands website in early August as well as the tour dates for the second leg of the Omen tour, which began in November and ended in early December. The new EP was released 23 October 2015, and featured a reworking of 'Weg Zu Mir' originally from 'Child of Glass' which served as a preview for the upcoming 'Best of' album.

On 26 February 2016, their 'best of' album Nemesis: The Best of & Reworked was released with re-recorded versions of BlutEngel classics. To support this release, they will be playing 'Nemesis - Open Air Festival' in July.

Due to legal issues. Omen was re-released under the title Save Us.

Complete, the first single from the upcoming 10th album, Leitbild, was released on December 2, 2016. it featured two b-sides and a remix by British darkwave act, Massive Ego. The 2nd single "Lebe Deinen Traum" was released as a digital single on February 3rd, 2017.

Leitbild was released on February 17th. The album would be the bands 3rd straight album to chart in the top 5 of the Media Control Charts at #4. The album would also chart Swiss Music Charts at #49. Blutengel will go on Tour starting in April and ending in May to promote Leitbild.
Sites:
blutengel.de, Facebook, MySpace, Bandcamp
Members:
Chris Pohl, Constance Rudert, Eva Pölzing, Gini, Kati (2), Nina Bendigkeit, Sonja Semmler, Ulrike Goldmann
Variations:
Viewing All | Blutengel
Blut Engel