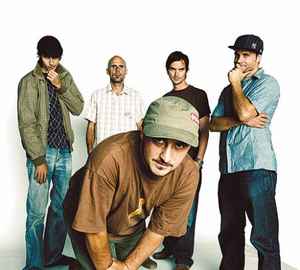 Active since the early nineties, Texta was an important influence in the first wave of Austrian Hiphop, including Total Chaos, Waxolutionists, and Aphrodelics. Texta is still a brandmark for quality hiphop with good and funny lyrics. They didnt change their style to sell more records (Like many others did).

Texta contains four MC's Huckey, Laima, Flip (3) and Skero and one DJ, DJ Dan (4). Some of them are active writer or b-boys. On stage, they appear to be the hiphop reincarnation of The Daltons. Due to the geographical distance of Linz to Munich, they got to work with Blumentopf on several tracks. Texta is part of a supergroup called Kaleidoskop (2), starring members of Blumentopf and Total Chaos. Recordings and Live Gigs of this supercrew are pretty rare cause it's hard to time 12 people.

Texta started as one of the first bands in the german speaking part of Europe to rap in their native dialect, which is sometimes hard to understand. "Mundartrap" got a legit part of hiphop in Austria and Switzerland. The tracks Sprachbarrieren features German, Austrian and Swiss rappers who talk about special expressions in their dialect and similarities in spoken language. On their last album Paroli, they featured their brothers in mind Attwenger, which is a perfect combination of folk, electronic, rap and craziness.

They started an own label, Tonträger Records to promote sideprojects and the scene around them in Linz / Upperaustria. Texta was always involved in political activities, showing support for antifashistic or similar actions. They also run projects with African musicians in Senegal and Kenia. After 15 years in buisiness, they still release music, have a bouncing live show and have fun doing it. No one of them makes a living only by performing, everyone has a normal job.

Funny detail on the side, in 2002 they recorded a song for their album Blickwinkel, starring the unknown, not too bad words talking Sido. They didnt take the song for the lp and released it as free download on their website.
Sites:
texta.at, MySpace, Wikipedia
Members:
Daniel Reisinger, Harald Renner, Klaus Laimer, Martin Schlager, Philipp Kroll
Variations:
Viewing All | Texta
T