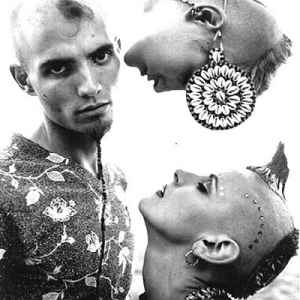 Profile:
One of the most colourful and eccentric acts to emerge from South Africa, Qcumba Zoo were formed in 1995 around the omnisexual Levannah (singer/songwriter) and Owl (multi-instrumentalist/producer). Initially they performed as a duo, playing offbeat accoustic originals anywhere anyone would listen.

The first single, "The Child (Inside)", was released in August of that year and shot straight to the top of the charts, earning them the "Best New Band" award at the 1996 SAMAs (South African Music Awards).

In May 1996 their debut album "Big" was released locally by David Gresham Records, stimulating interest from a number of international record companies. Dancer and sculptor Tziki, "the rubber-band-body, fire-dancing sprite" joined later as their constant on-stage visual accompaniment for the first album. (She has since committed suicide.)

Qcumba Zoo were signed up by Arista New York, who licensed the album for international release as "Wake Up & Dream". The band's name, too was changed to Qkumba Zoo.

The single, "The Child (Inside)", made it to the #1 spot again, this time on the Billboard's Club Chart, after having being launched in the USA at the end of 1996. The band also claimed the "Best Dance Album" and "Best Pop Album" awards at the 1997 SAMAs.

Qkumba Zoo left Arista in favour of their own independant label and emerged in the year 2000 with a new album, "Butterfly Peepl". The band's name, too was shorted again to QZoo. Although the album revealed matured songcrafting skills, it went by almost unnoticed and the band disappeared off the stage.

In 2001, Levannah and Owl briefly re-appeared under the new name Innaskinz, joined by a female bassist called Cajun, and they've also been spotted as QZoo with their interpretation of "O Holy Night" on the 2002 Christmas compilation "5fm presents: The Santa Sessions".