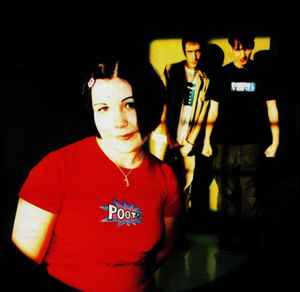 Profile:
Bis are a Scottish indie pop band formed in 1994, composed of Steven Clark (Sci-fi Steven), John Clark (John Disco), and Amanda MacKinnon (Manda Rin). The band's name, rhyming with 'this', derives from "Black Iron Skyline", a lyric from the song "Twilight of a Champion" by The The. The band broke up in 2003, but reformed briefly in 2007 for a series of concerts. In 2009 they reformed again, and released a new album in 2014.

Bis are supposedly the first band ever to appear on the BBC's classic "Top Of The Pops" TV program in early 1996 without having signed a record deal, performing the track "Kandy Pop". Whilst they weren't 'officially' signed to a multi-part deal yet (later eventually signed with Wiiija Records), this could be slightly discounted as they had in fact had a 7" released before this on a Spanish label Acuarela Discos, also the track "Kandy Pop" was just about to be released on the label Chemikal Underground the week after they appeared on TOTP anyway.
Sites:
bisnation.com, Wikipedia
Aliases:
Data Panik
Members:
Amanda MacKinnon, John Clark, Steven Clark
Variations:
Viewing All | Bis
BIS, bis