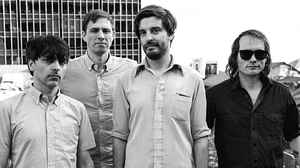 Profile:
Holy Fuck are a Toronto-based outfit, with a concept to mimic modern electronic music, without using modern equipment, such as laptops or programmed backing tracks. They record and play (unrehearsed) live with traditional instruments like drums, a bass and keyboards, as well as toy keyboards, guitar peddles, mixers, and even a 35mm film synchronizer.