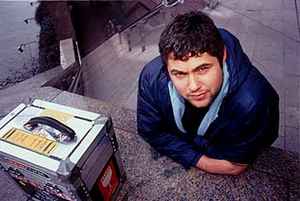 For anybody who is a fan of Terry Francis, check out his '98 essential mix which is still worth listening to now
https://www.mixesdb.com/db/index.php?title=1998-04-05%20-%20Terry%20Francis%20-%20Essential%20Mix&action=purge
and on Soundcloud/Mixcloud

February 17, 2015
I had the great pleasure of seeing Terry play at an intimate Surreal/ Eye 4 Sound event in the back room at The End in '95 (a time when the word 'underground' meant something). I remember being completely immersed in his music on a journey somewhere very deep and thumping! I wish I knew all the records he played, especially in the last hour of his set as it got more minimal, abstract, warm and wonderful. I was captivated and became a life long fan of Terry's who is surely one of the greatest DJs in the world.
Reply Notify me 6 Helpful

The boss of solid underground acid house and tech grooves, would go to the ends of the earth to hear this man play.

The most outstanding DJ I have ever had the pleasure to hear play.
A DJ who can follow another DJ and lift the atmosphere at the club or party with a single tune - top stuff!