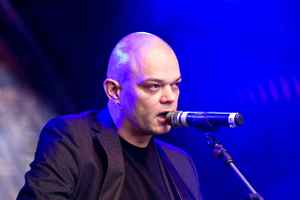 Profile:
Naevus is a British experimental rock group. Formed in London in 1998 by Lloyd James (vocals, acoustic guitar) and Joanne Owen (bass, accordion), Naevus were often categorised as part of the ‘neo-folk’ genre. Their music has also drawn comparison with acts such as Swans and Wire, and often includes elements of industrial music.

The band released four albums between 1999 and 2004 before expanding to a four-piece with the addition of John Murphy (drums) and Greg Ferrari (electric guitar). Their first album with the expanded line-up was Silent Life, which was a critical success, and included contributions from members of Urge Within, Sieben, and Current 93. Their sixth album Relatively Close To The Sea saw them combining elements of their earlier post-punk sounds alongside more melodic material and progressive rock elements. In 2009, Hunter Barr returned as drummer, having previously played on EP The Body Speaks in 2004, and the EP Days that Go followed in 2010. The seventh Naevus album, The Division of Labour, was completed by Lloyd James as a solo effort and was released in May 2012. In 2013, the compilation CDs Stations and Others were released, gathering together all singles, B-sides and compilation tracks from 2001 to 2012 as well as new and previously unreleased material. The EP Backsaddling was released in 2014. The eighth Naevus studio album, Curses, was released in 2018.
Sites:
naevusuk.com, Bandcamp, Facebook, Wikipedia
Members:
Arthur Shaw, Ben McLees, Clay Young, Greg Ferrari, Hunter Barr, Joanne Owen, John Murphy, Laura Tanner, Lloyd James, Sam Astley