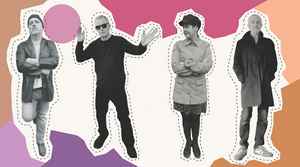 Profile:
Hue Williams and Amelia Fletcher of the Pooh Sticks are reunited in Swansea Sound, with a brand new set of songs and full-on indie attitude.

Swansea Sound singles will be released on grassroots indie labels, and made available digitally on the Swansea Sound bandcamp page. The songs will not be found on Spotify, Apple Music or other corporate providers.