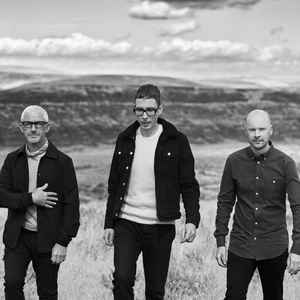 Jono Grant and Paavo Siljamäki had met at Westminster University and kicked off the Anjunabeats label in summer 1999 with a track titled "Volume One", This track was released in 2000 under the artist name "Anjunabeats". For the duo's second track release in 2000 titled "Different Ways" and their third in 2001 titled "Release" they went under the artist name of "Free State" and Anjunabeats remained as the label name.

March 16, 2021
Above & Beyond loved releasing some of their great music in an abundance of poor quality CD'r's
most on Anjunabeats don't even play today unless they were well stored even then I have seen them deteriorate euphonic were the same luckily I trashed all mine after I ripped them to hardrives this way they will be with me a lot longer..... its rife these days Cdr releases I won't touch them no more.
Reply Notify me 1 Helpful

November 24, 2020
Above & Beyond started their career in 2000, and absolutely dominated the trance scene for at least a decade, delivering a ton of timeless masterpieces in the process.
Since the very beginning, they made Ferry, Armin, Paul, Tiesto and other big names of that time look like amateurs.
Above & Beyond really took the trance genre to another level.

Ten years later, they started changing their sound... and their post-2012 productions just can't compare with their earlier works. It's still good music considering the general decline of trance music over the years and the huge amount of trash releases we see nowadays, but it's really disappointing to see how they lowered their standards, knowing what they are capable of.

January 16, 2020
I know it's sort of expected to talk about a Trance artist's decline (Discogs should just cut out the middle man and let you review the genre itself), but I'm going to opt to focus on the more favourable early years of Above & Beyond.

I discovered the trio in 2004, when "Satellite" was fresh onto the scene. Naturally, I went back a few years and found some exceptional productions and remixes. To name a few, you have "Razorfish", "No One On Earth", and remixes of Madonna - What It Feels Like For A Girl and Ayumi Hamasaki - M. My absolute favourite creation of theirs is "Getting Away", from their side-project Tranquility Base. A perfect build, with beautiful flourishing chord progression.

Between the Anjunabeats label-runners and Swedish Trance producer Airbase, I learned a lot about what Trance was in the noughties, which served, in part, as encouragement to get into music composition myself. Melody, emotion, progression, and character. Obviously, it will never be as it was, due to changing trends in the scene itself, but we can at least look back fondly on what is now part of the "classics" era.
Reply Notify me 1 Helpful

The most famous and influential trance act of all times, Above & Beyond and their side monikers, along with their side project with Justine Suissa, OceaLab, were certainly the main responsible for defining what trance would become in the mid of the 2000's (the "era" when the genre reached its pinnacle for many trance fans, and I would rather say for most of them): an even better kind of electronic music, more melodic and less "festive" in comparison to what it used to be in the 90's, with more beautiful and soulful arrengements and vocals (though, sadly, this is often called "cheesy" by some, and when I read things like this I can't avoid but to agree with Vangelis: we are living a musical era when you can't turn on the radio without having to take an aspirin – that's what happens when melody, the most important aspect of music, becomes "cheese"). Even though trance evolved and took a different direction around the 2010's (what will always happen), and so did A&B and most other trance acts, those three guys (and that girl) will always deserve our respect!

April 21, 2013
I became a fan of Above & Beyond in 2005 after hearing such tracks as "Air For Life" and "Alone Tonight". Since they changed their sound around the time of their "Group Therapy" album, I've felt there have been far fewer tracks released by them that I like. I'm afraid they've left their "epic/uplifting" melodic trance style that I loved so much behind and are now focusing more on electro and progressive house. It's a shame that they just completely dropped their roots and trademark style for a more commercial sound.
Reply  See 3 replies Notify me 9 Helpful

The remix they did for Madonna is epic.
Thanks guys!

words can never show just how much emotion is in the sounds that above and
beyond creates. the atmosphere of this music will help you fly... when you need therapy,
this music is here, (and it gives me that) when you need inspiration, clear guidance,
anything... you want a review? I can't say enough about this group.

above and beyond is some of the greatest trance you'll ever hear in your lifetime.

I own 2 above and beyond cd's, still haven't picked up the newest cd but I have heard it. (getting it soon)
I usually don't pick up a album from an artist unless there's more than a couple songs that I
like hearing again. with A&B I'm never left feeling like I just wasted my money on
a cd that'll be in the cd player only a few times in my lifetime. I've enjoyed most of the
tracks as they've made me so happy with countless moments of joy, my life is so enhanced by
this music. The cd's and LP's are worth every penny, trust me... just listen to the effort in the
producing, this group pours they're whole beings into the music, you can feel it.

Above & Beyond has one of the biggest trance label Anjuna Beats and always brings the best for the trance scene. Their biggest hit that made them stars of the trance scene is their remix on Madonnas : What is feels like for a girl and since that day they are one of the biggest names in the elecronic dance music world. They also work with the amazing singe Justine Sussia under the alias Oceanlab that many of the biggest djs always plays. They also have theit weekly radio show Trance Around the World on Ministry of sound every Tuesday 9am (CET). They have truely earned a spot in the electronic history...

Above and Beyond, are not the up and coming Trance act, they Are and will be a cornerstone in trance music for generations to come. Magic is weaved into the melodies they mix. A great set is spun everytime they DJ. But most important, is the greatness created after mixing regular pop artists such as Madonna, and Britney. The music becomes a poetic melody! Anjunabeats Volume 1 is a must for fans. HIGHLY recommended.