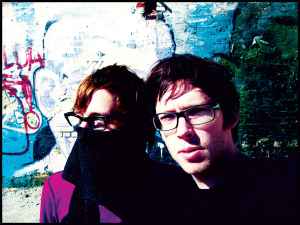 Real Name:
Ola Lindefelt, Fredrik Hultin
Profile:
Swedish anarchic C86 duo sprung out of a joke art project called "The Love of Kevin, Colour, Chaos and the Sound of K", starting in 2003 by performing songs on their live pirate radio stream "The House of Kevins". They debuted with a self-released gatefold 7" EP as The Lovekevins in 2005, shortened their name to The LK for their 2008 album release, toured the world and disbanded in 2009.
Sites:
MySpace
Members:
Fredrik Hultin, Ola Lindefelt
Variations:
Viewing All | The Lovekevins
The LK