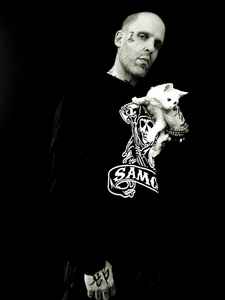 Real Name:
Brock Van Wey
Profile:
bvdub is Brock Van Wey, a native of the San Francisco Bay Area. Devoting his life to the SF rave scene in the late 80's, he began to DJ and promote his own deep house and ambient events in 1991, rising 10 years before a self-imposed exile to China in 2001 to escape the state of a scene he could no longer accept, which lasted until 2015. He began to produce his own music in 2006, first releasing in 2007 on Night Drive Music. Soon after, his overtly emotional sound spread to Styrax, Millions of Moments, Southern Outpost and Meanwhile, before a natural and gradual shift to his trademark ambient onslaughts saw him call n5MD, Glacial Movements, AY, Darla, Echospace, Kompakt and many more home.

Brock has also released music under his given name, Brock Van Wey, as Earth House Hold (deep house), and as East Of Oceans (drum & bass).

NOTE: This artist's name should be spelled in all lower caps, which is the way it has been written since its inception and is the specific, intended presentation.
Sites:
bvdub.org, Bandcamp, Bandcamp, Bandcamp, Bandcamp, Facebook, Last.fm, MySpace, SoundCloud
Aliases:
Brock Van Wey, Earth House Hold, East Of Oceans
Variations:
Viewing All | Bvdub
bvdub

February 17, 2021
one of the few artists i trust fully to make insightful and powerful music
Reply Notify me 3 Helpful

There's a lot of overwrought, formless, and full of cheap sentimentality ambient out there, and that's ok because it is what it is. Seemingly to casual ears, this is the case with dvdub (Brock Van Wey) as well, but there is much substance here eventually reward for the patient listener. Van Wey's ideas unfold at their own thoughtful, mysterious and glacial pace and seemingly with little effort. These austere (and often sad) environments are from a tension created by an ambiguous state, between warm and cold atmospheres, and interestingly enough, able to resonate at such deep and emotional levels. Categorically I suppose this music belongs to shoegaze and post-rock more than ambient and has more in common with Windy & Carl and Slowdive than it does Ishq or Marconi Union. "I'll Only Break Your Heart", "The Art of Dying Alone" and "Then" are stunning albums and definitely my favorite so far. But considering how prolific he is and his tremendous output in less than a decade, this music is something to enjoy for many years should he never make another album again.

I am always critical against artists producing 10-15 albums per year, in my humble opinion this pace is negatively correlated with quality. How wrong i am in the case of Bvdub. With few exceptions, all his albums are very carefully crafted to the last detail like he was working years on each one of them. No, you will not find the convenient automatic pilot modus here, each message (album) is unique, sincere, with its own raison d'etre. A remarkable feat, indeed, hatts off. Favourites: anything without vocals.

May 16, 2015
Please let me know if anyone will have carefully ecstasy on vinyl...will pay almost anything : )
Reply  See 1 reply Notify me Helpful

February 18, 2015
Great music to blast in the car on the way back from Vegas after a long trip of abusing ones body. I just "select all / shuffle", warm up the vape and enjoy the ride. When each song ends, it's like a cleansing - starts off slow and then layers upon layers get built up higher and higher then RELEASE. Compare to any innuendos you want :)
Reply Notify me 4 Helpful

October 16, 2014
Bvdub's work (LP and EP) up to and including year 2009 has been something I always resort to. It is quite novel, fresh, different, powerful. After the "Art of Dying Alone" he had changed his music expression style, and I keep having the impression that all subsequent albums sound more or less the same as the previous one.

"Dreams od Red Chambers", "A Prayer to False Gods", "We Were the Sun", etc... These are legendary releases. The first album as Earth House Hold also brings very nice music.