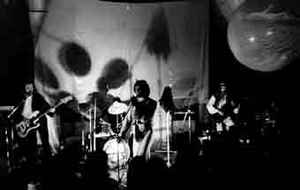 Profile:
Arachnoid were a short lived 70's band whose debut album marked another excellent example of French dark progressive rock. The band name refers to a membrane that surrounds the brain – thus representing the cerebral and psychedelic aspect of their music and also designates the spider family.

In 1978 the band released their only album Arachnoid which originally had no title at all. Due to a lack of management the band grew weary and split up in June 1978.
Members:
Bernard Minig, François Faugieres, Marc Meryl, Nicolas Popowski, Patrick Woindrich, Pierre Kuti

This is a French prog classic, built upon tension-filled melodic structures in the vein of King Crimson’s Larks’ Tongues in Aspic and dramatic French-language vocals à la Ange.