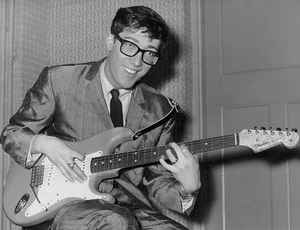 Lead guitarist for band The Shadows. He was also the owner of the first imported Fender Stratocaster guitar in the UK, which was bought for him by friend and colleague Cliff Richard and later stolen by Bruce Welch.

The Shadows primarily performed instrumentals, and was formed as a backing band for singer Cliff Richard.

Marvin is famous for having a distinctive guitar sound and appearance, primarily using a clean sound with very high reverb and vibrato, which primarily gives a dreamy effect to the sound.