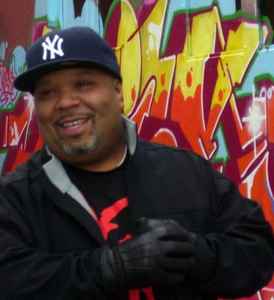 Louis Flores better known as BreakBeat Lou is a staple and legend in the music / entertainment industry. Starting as disc jockey 1974 turn professional in 1981 when he also began his production career, Louis is one of the few that can make the statement that they had over 20 years successful in the industry.
He’s worked in every facet from The Ultimate Breaks and Beats Compilation with the late Leonard “BreakBeat Lenny” Roberts this legendary series has been sampled by many of hip-hop’s elite producers like DJ Premier, Large Professor, The Bomb Squad, Pete Rock, Dr. Dre and Marley Marl. Instrumental in the production of countless classic recordings over the years*, his work with UBB became the blueprint for sampled music and remains highly influential to this day. Contemporary producers such as the late J Dilla, Salaam Remi and Just Blaze to name a few, continue to heavily sample the compilation. Drum & Bass is a direct descendent of the Ultimate Breaks and Beats collection as its core elements were lifted directly from the series to The Original Beat Junky Production with the world renown editor / producer Late Jose “Chep” Nunez in addition he worked with 2 in a Room, Tim Dog, Ultramagnetic MC’s, the late Scott LaRock, the late Paul C, just to name a few.
With the vast experience and respect that the industry Louis Flores has it is evident that this contribution will continue to welcome and relevant
Sites:
ultimatebreaksandbeats.com
Aliases:
BreakBeat Lou
Variations:
Viewing All | Louis Flores
L. Flores, Louie Flores, Louis BreakBeat Lou Flores, Luis Flores

February 7, 2015
As Discogs only allows Youtube videos to be embedded, here's a link to Breakbeat Lou's Boiler Room session on Dailymotion:
http://www.dailymotion.com/video/x2gf089_collections-breakbeat-lou_music