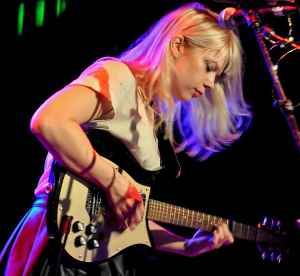 Real Name:
Barbara Josephine Bulat
Profile:
Basia Bulat is a Montreal based, Canadian folk singer / songwriter who was born 13 April, 1984, in Etobicoke, Toronto, but grew up in London, Ontario. She is of Polish ancestry, and her mother was a classical music teacher. She plays a variety of instruments, like the piano, guitar, autoharp and zither. In 2005, she released an independent EP simply called Basia Bulat. Later, she got a recording contract with Rough Trade, who released Oh, My Darling, produced by Howard Bilerman, in 2007. Her third album, the 2013 Tall, Tall Shadow, was supposedly written mainly due to the death of a friend.
Sites:
basiabulat.com, MySpace, Facebook, Last.fm, Twitter, Wikipedia
In Groups:
The Adam Brown