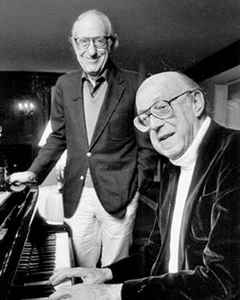 Profile:
Songwriting and composing team who worked on movies, television and stage.

Jay Livingston and Ray Evans met at the Wharton School at the University of Pennsylvania, having met in a dance band. Their professional collaboration began in 1937. Livingston and Evans won the Academy Award for Best Original Song three times, in 1948 for the song "Buttons and Bows", written for the movie The Paleface; in 1950 for the song "Mona Lisa", written for the movie Captain Carey, U.S.A.; and in 1956 for the song "Whatever Will Be, Will Be (Que Sera, Sera)," featured in the movie The Man Who Knew Too Much. Livingston and Evans wrote popular TV themes for shows including Bonanza and Mr. Ed. They also wrote the Christmas song "Silver Bells" in 1951 for the film The Lemon Drop Kid as well as "Never Let Me Go" for the 1956 film The Scarlet Hour.