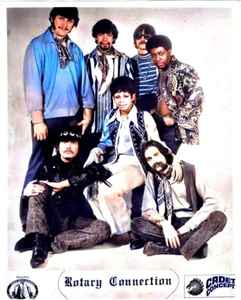 Profile:
The classically trained Charles Stepney honed his skill as a jazz pianist and vibraphone player through his work for the Chess label in the 1960s, eventually graduating to sheet writer, arranger, and producer. His friend Marshall Chess—son of label owner Leonard Chess—had founded Cadet Concept as a younger subsidiary of the Cadet label, and their first release was the 1967 debut by a conceptual group called The Rotary Connection, formed by Marshall Chess with Stepney acting as co-producer and arranger. The group was designed as a way for the label to tap into the psychedelic era, combining a little-known white rock group called The Proper Strangers with the voices of Black singers Sidney Barnes and Minnie Riperton—the latter of whom Stepney had first worked with on her solo single “Lonely Girl” under the name Andrea Davis.

It was Stepney’s studio genius that made Rotary Connection’s mix of acid-laced rock, classical strings (courtesy of the Chicago Symphony Orchestra), and Riperton’s operatic voice hang together.

October 27, 2022
who's the guy with aliester crowley eyes in all the mug shot / promo photos of the band.. he usually has the handlebard mustachio - what i mean is.. he's doing the 'bug out and stare' classic hypnotism look. is that Bobby Simms?

December 29, 2019
Quality control alert. Really need some diligent cleanup on the entries - in particular, the first album and the initial pressing of 2nd album "Aladdin" - as regards the listing of "Rotary Connection" versus "The Rotary Connection." From what I can tell after some (admittedly succinct) research, the band called itself simply Rotary Connection, and the first album was also titled "Rotary Connection" despite a misstep on the part of the company or pressing plant that had the LP labels read "The Rotary Connection" on all the early pressings, an error that was subsequently caught and corrected. Similarly, for "Aladdin" the LP labels create confusion that runs rampant through the Discogs listings, which have been rendered wildly inconsistent, as even a quick glance at the photos associated with the various entries for that title reveals.

February 14, 2016
I think Phil Upchurch must be added to this line up.
See 2 replies

Also Sidney Barnes is currently doing well performing globally and with George Clinton in Parliament / Funkadlic.
Sid was in The Serenaders with George Kerr at Motown and also staff writers at Motown's New York office.
Sid then went to become a staff writer at Sue Records with JJ Jackson before teaming up with Clinton at Golden World. It was Andre Williams who took Barnes to Chess and Rotary. Sid doesn't appear on Hey Love LP.
Check out http://www.sidneybarnes.co.uk or http://www.sidneybarnes.net