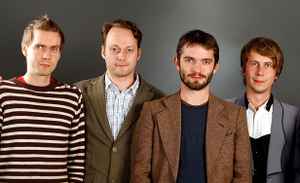 I wonder when they will record another real album. The latest one kveikur was magnificent but I am not a fan of what they have done since.

July 8, 2010
The most fascinating thing about Sigur Ros is they cannot be pinned down, categorised or even immediately liked. Many before them tried to sound like from another planet, Sigur Ros ARE from another planet. Iceland is only their choice of home here on earth.
See 1 reply

Sigur Rós have some of the rarest vinyl releases of any artist. Their albums were pressed in strictly limited numbers and it seems that copies are changing hands for princely sums. In order to maintain the purity of the art and vision, Sig Ros recently released a Limited Edition Deluxe Set called "In a Frozen Sea: A Year With Sigur Rós." The set is gorgeously produced, with a minimalist, photo-based style and an amazing amount of sophistication with very little babble to distract from the visuals. The 7xLP Book only proved that Sigur Rós are a constant sonic force, working outside the mainstream music industry, standing proudly for all that is pure and raw in music today.

I've always felt Sigur Rós are mistakenly lumped in with the rest of the 'Post Rock' scene. I believe they have far more in common with Shoegazer acts such as Slowdive ('Myrkur' from their debut is pure Slowdive) and My Bloody Valentine, and even some of the more leftfield pop acts like The Flaming Lips. They do demonstrate a mastery of dynamics like many Post Rock acts, but rarely to they resort to the usual effects-pedal push to the finish. Anyway, whatever they are, and whatever it is that they do, I for one hope they keep doing it!

(Oh and whilst I'm here - if you ever get the chance of seeing this band live, take it!)

March 25, 2003
i was surprised to see sigur ros on here, but nonetheless, they put out the most beautiful emotional music ive heard. i had a chance to check them out live, and was left stunned. the atmospheric music reflects the surroundings in iceland. All the releases are worth your time to listen to, but Agaetis Byrjun is a prime place to start.