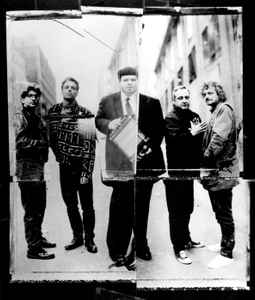 Evolving from Cleveland's Teutonic protopunks, Rocket From the Tomb, Pere Ubu was formed late in 1975 by Thomas (aka Crocus Behemoth) and guitarist Peter Laughner (who died in 1977). Ubu's classic early singles, "Heart Of Darkness" and "Final Solution," oozed restless angst way before it became the domain of spoiled mallrats. By 1978's aggressive The Modern Dance and the wilder Dub Housing, Pere Ubu's subversions of rock were guided by superior musicianship and fallout from Thomas's Jehovah's Witness upbringing. Personality quirks split the band, and Thomas regrouped for three more self-indulgent albums through 1982, including the abstract stare-down of The Art Of Walking, all with some difficult sonic perversion to recommend them.

The remasters sound is spot on. Almost sounding better than the originals and priced cheaply. Great job Fire Records !

November 20, 2016
Ohio's finest with DEVO. Essential listening: Terminal Tower, Modern Dance, Dub Housing, New Picnic Time and Art Of Walking. If you haven't heard this band yet in your life, you are in for a treat. Mostly for open-minded listeners though. A pretty difficult band at points, but great stuff! =)
Reply Notify me 2 Helpful

December 27, 2013
On which record Wayne Kramer should play with Pere Ubu. No one! So, please update this.
Reply  See 1 reply Notify me Helpful