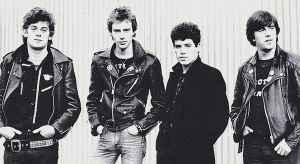 This version of the band recorded their first LP "Inflammable Material" which included their signature songs about life in Belfast "Alternative Ulster", "Suspect Device" and "Wasted Life" as well as a musically bold reworking of Bob Marley's "Johnny Was".

Moving to London in 1979, the band lost Brian Faloon who was replaced on drums by Jim Reilly. They recorded the LP "Nobody's Heroes" for Chrysalis, an LP which was more pop than "Inflammable Material" but continued exploring similar themes. A cover of The Specials' "Doesn't Make It Alright" was included, though less successfully than "Johnny Was". "Nobody's Heroes" was followed by the live LP "Hanx" as well as the pure power pop of the LPs "Go For It" and "Now Then" (featuring new drummer Dolphin Taylor, previously of Tom Robinson Band), which failed to satisfy their fans. In 1983 the band decided to call it a day.

In 1987, Burns reformed the band with McMordie, Cluney and Taylor. When McMordie left in 1990, he was replaced on bass by Bruce Foxton, previously of The Jam, though McMordie rejoined in 2006. The current incarnation of SLF, which still tours, includes Burns, bassist Ali McMordie, guitarist Ian McCallum and drummer Steve Grantley.

June 4, 2022
45th anniversary of the bands first practice today. going to listen to some of their music today to celebrate with them. may even drink some guinness

March 17, 2015
Don't forget to listen to SLF today when you are eating your corned beef and cabbage :]
Reply  See 1 reply Notify me 3 Helpful