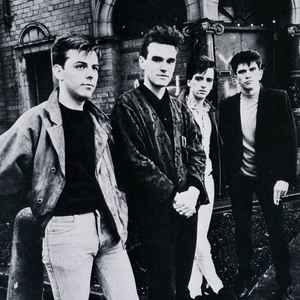 Profile:
The Smiths were an English rock band formed in Manchester in 1982. The group consisted of vocalist Morrissey, guitarist Johnny Marr, bassist Andy Rourke, and drummer Mike Joyce. Critics have called them one of the most important bands to emerge from the British independent music scene of the 1980s. In 2002, the NME named the Smiths "the artist to have had the most influence on the NME". In 2003, all four of their albums appeared on Rolling Stone's list of the "500 Greatest Albums of All Time". The band broke up in 1987 due to internal tensions and have turned down several offers to reunite.
Sites:
officialsmiths.co.uk, Facebook, passionsjustlikemine.com, SoundCloud, Wikipedia, YouTube, YouTube
Members:
Andy Rourke, Craig Gannon, Dale Hibbert, Johnny Marr, Mike Joyce, Steven Morrissey
Variations:
Viewing All | The Smiths
Smith's, Smiths, The Smits, ザ・スミス

February 1, 2021
If there is a single song on any Smiths' album that makes you OSCILLATE WILDLY, Listen to it 20 times in a row!
Soon after that experience, just COME to CLIMAX or NEVER listen to a Smiths' song again..... PLEASE!
See 1 reply

July 13, 2017
The Smiths are one of the greatest English bands ever.