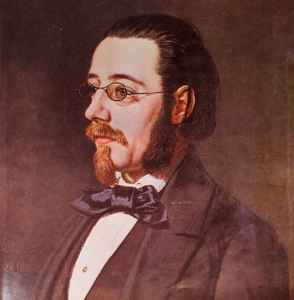 Real Name:
Bedřich Smetana
Profile:
Bedřich Smetana (pronounced [ˈbɛdr̝ɪx ˈsmɛtana]; 2 March 1824 - 12 May 1884) was a Czech composer. He is best known for his symphonic poem Vltava (better known as The Moldau), the second in a cycle of six which he entitled Má vlast (My Country), and for his opera Prodaná nevěsta (The Bartered Bride).

Smetana was the son of a brewer in Litomyšl in Bohemia, then part of the Austrian Empire. He studied piano and violin from an early age, and played in an amateur string quartet with other members of his family. Smetana attended a high school in Pilsen from 1840-1843. He studied music in Prague, despite initial resistance from his father. He secured a post as music master to a noble family, and in 1848 received funds from Franz Liszt to establish his own music school.

September 1855 marked the death of his second child, his beloved four-year-old daughter Bedřiška. When his third child died nine months later, he committed himself to composition, producing the Piano Trio in G minor. This piece is full of sadness and despair, making use of phrases that are cut short, possibly in resemblance to his daughter's own life.

In 1856, Smetana moved to Gothenburg, Sweden, where he taught, conducted and gave chamber music recitals. In 1863, back in Prague, he opened a new school of music dedicated to promoting specifically Czech music. By 1874 he had become deaf from syphilis, but he continued to compose; Má vlast was written after his deafness had developed. Smetana also suffered from tinnitus, which caused him to hear a continuous, maddening high note which he described as the "shrill whistle of a first inversion chord of A-flat in the highest register of the piccolo".

From 1875 he lived in small village of Jabkenice.

His string quartet in E minor, Z mého života (From My Life, composed in 1876), the first of only two quartets, is an autobiographical work. The final movement is punctuated by a piercing high E in the first violin which, Smetana explained, represents the devastating effects of his tinnitus. He may also be hinting at this personal misfortune with the piccolo scoring in Má vlast. In 1883 Smetana, due to further progressive neurological effects of his illness, became insane, and was taken to a mental hospital in Prague, where he died the following year. He is interred in the Vyšehrad cemetery in Prague.

Rest... In... Peace... by crimsonmetal74
Classical Composers by Dr.SultanAszazin
Composer's In My Collection by alantrewhitt1
Czech Composers by Blanicky
Favorite Artists by SoulDancer
The 50 Greatest Composers by Internaut
View More Lists →