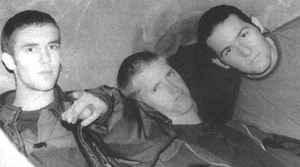 Profile:
The Group was formed in the early part of 1991, concentrating on writing tracks and learning how to use the technology which played an important part in making music then. With little experience and minimal amounts of equipment they set about creating their own distinctive style of house music, which became known as happycore. They merged the basic rhythms of house music with bouncing bass lines, funky riffs topped off with lashings of hardcore.
Once finding their creative style which they desired the band set about playing their songs to the masses and forced their way into the Eclipse club in Coventry set up their instruments and performed their new songs to the public. This was the turning point for them. On the strength of that single performance the band were flocked with requests as to when a record would be available. Although having only done a few live gigs the group quickly established themselves as one of the leading dance acts in the country supporting the likes of Sub Sub, prodigy, T99, Nexus 21 & Altern8 on the hit man and her to name but a few. With the help of a good friend Lynval Golding from the Specials and Producer Eli Thompson they set about recording more songs in a professional studio and finding a manager who turned out to be the Eclipse owner Stuart Reid and releasing a four track ep called 'Life' on cassette. The band continued on the live Rave circuit culminating at an Aircratf hanger in Norfolk 'T2' in front of 6500 people. The band then clinched a major recording contract with London Records FFRR in the early part of 1992. A new ep was released called 'The Spice of Life' the original white label of this contained a sample by the famous composer Carl Orff who's family threatened to sue the band and would not allow the use of the sample in the record. This bomb shell took away the core of the track and forced the band back into the studio to produce a new version of the track that was a bastardised version of the main track spice of life which they were not happy with but due to time restraints was released by the record company. The release did not live up to the band expectations or the record companies as the track the band had become known for was no longer in the form it should have been. The band battered and bruised went back into the recording studio a collaborated with Orbital and Dj seduction to produce a new white label Vibe Tribe ep which was their final recording together as a group as the frustration of the first 12" took it's toll on the band and the members drifted apart. In existence is a complete album of material never released in digital form. Nathan Joseph having moved to London continued with his music and today has become successfully known as 'Whitey' Chris Dalton is now a graphic/Web designer, Chris McGuigan works at Herbal in London.
Aliases:
Vibe Tribe
Members:
Chris Dalton, Chris McGuigan, Nathan Joseph Wannacot