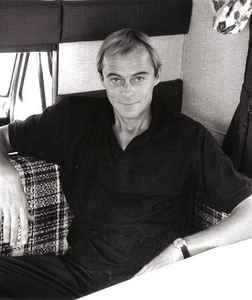 Real Name:
Karel Francis Fialka
Profile:
Karel Fialka, electro artist and poet, was born in Bengal, India to a Czech father & Scottish mother. In 1979, his Indie release Armband on the Red Shift label became a cult classic. Then in 1980 he had a radio hit with the song The Eyes Have It, which has been featured on many New Wave collections, and still has a lot of airplay. This was taken from his critically well-received album Still Life on the Blueprint label. Another release from this album was (the almost prophetic) File In Forget.

It was to be another eight years before his next major release, though he was a very active songwritter during the time and numerous artists have covered his songs. 1988 brought Karel his biggest hit, the catchy and serious Hey Matthew on Miles Copeland's I.R.S. records. The follow up album was Human Animal, containing more quirky glimpses of life from Karel's unique point of view. Two other singles were released from the album, Eat, Drink, Dance, Relax and You Be The Judge.The CD version of the album included extended mixes including 2 new versions of the 1980 single "The Eyes Have It".

Karel is still writing and recording with other bands and artists, as well as being deeply immersed in production duties. He has been at work on his third album for sometime, a dark hommage called Film Noir which was release in 2009 as digital download, or in two hard copy formats from karelfialka.com .
Sites:
karelfialka.com
Variations:
Viewing All | Karel Fialka
Fialka, K. Fialka