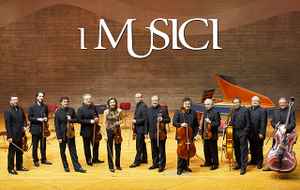 Profile:
A conductorless Italian chamber orchestra, I Musici was formed in Rome in 1952 by graduates from Accademia di Santa Cecilia. Original members have successively been replaced on an egalitarian basis, maintaining an energy and freshness to their work. The ensemble consists of six violins, two violas, two cellos, a double bass and a harpsichord. Their works are primarily in the field of Baroque, especially compositions by Vivaldi, Albinoni, Marcello, Lotti and Geminiani.